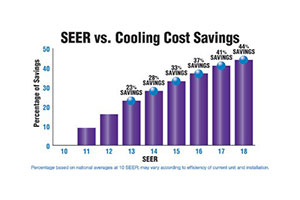 If you’re considering a new central air conditioning or mini-split system and haven’t shopped for one in a while, you may be surprised at how many acronyms you’ll encounter along the way.

One of the most important of these acronyms is SEER, which stands for Seasonal Energy Efficiency Rating. Here’s a quick SEER Q&A to help you be a more informed buyer when the time comes to invest in a new A/C.

While SEER rating isn’t the only factor that effects the efficiency of an air conditioning unit in your home (proper installation, maintenance and sizing of your equipment are also critical), it is still an important measure to keep in mind when shopping for a new air conditioner for your North Fork or East End home.

Ready to upgrade your old cooling system? No sweat! Contact Burt’s today for a FREE estimate on a new central air conditioner or mini-split system – expertly installed by our team of pros.